Miloje Milojević: Songs and Dances of Kosovo and Metohija 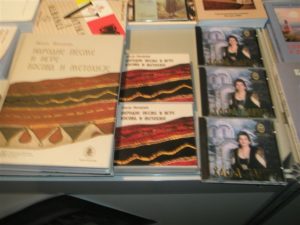 In cooperation with the Institute for textbooks and teaching aids, the Karić Foundation published the book “Folk songs and dances of Kosovo and Metohija” in 2004. It is an extensive collection of songs that was collected and recorded by a famous Serbian musicologist, composer and melographer Miloje Milojević, and edited by PhD Dragoslav Dević, a longtime professor and head of the Department of Ethnomusicology at the Faculty of Music in Belgrade. Although it was created back in 1930, this is its first publication. Recognizing the value of national significance, the Novi Sad Book Fair awarded this edition with the Zaharije Orfelin award.

This year the edition, priceless for Serbian heritage, has a supplement of a triple CD, which provides a complete and authentic sound experience. The first in the series consists of 30 recordings from the heartland, covering a wide range of original tunes performed by many singers and musicians from Kosovo and Metohija. The second CD is a kind of “compilation” of less known but equally worthy songs from the same area in an inspired and expressively rich interpretation of Mrs. Milanka Karićand the orchestra of Bora Dugić. We should not forget that Mrs. Milanka Karić as a great connoisseur of musical heritage of Kosovo and Metohija, which is also her homeland, carefully and thoroughly made ​​the selection of songs that were included on this disc.

The third CD is even more significant if we consider the number of musically illiterate people who still cherish Serbian vocal and instrumental tradition. This part of the audio release “Folk songs and dances of Kosovo and Metohija” was designed just for them, as it contains 93 audio files (made ​​by computer). The tunes can quickly and easily be learnt by listening, without a required knowledge of notation. The use of this CD will certainly be multiple in the future: from individual learning at home and abroad, through music education in all educational institutions and the amateur cultural and artistic societies and dance groups. Its educational value is immeasurable and at the present time is certainly unique.

Having decided to design, publish and implement such an ambitious and comprehensive project, the KarićFoundation has once again shown a remarkable interest in the preservation and presentation of Serbian musical heritage. The combination of traditional materials and a modern treatment method is undoubtedly the right mode, expanding the circle of reading and listening audience and contributing to the development of their musical sensibility. Hope remains that the Karić Foundation will continue its publishing activity in future as it, without any hesitation, can be referred to as modern enlightenment.
That is why we are looking forward to promoting this great project, which is scheduled for early December.