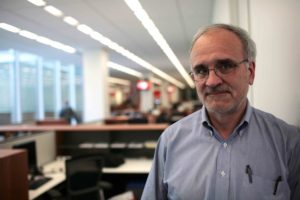 After forty years of investigative reporting and numerous awards, including three Pulitzer, Volt Bogdanich, American journalist and editor of the “New York Times”, Serbian by origin, is again in Belgrade.
For the first and only time, he stayed in our capital city in the mid-fifties. Now he came at the invitation of the Karić Foundation, on the occasion of the award that will be presented to him on Monday.

– My father. During his growing up in Belgrade, reading books he learned about the United States, the American value system and the importance of freedom of expression. I grew up in America in such an atmosphere. I am interested in everything that happens, I want to know what my government is doing and to pass it on to others.

Why is it necessary to be well informed?

– If people do not have information about what is happening around them, they are not even able to check how the government works. It is important to know how the government works, whether this work is good or bad. If you do not know that, the state gets too much power. And we’ve seen what can happen when too much power goes into wrong hands. History has shown that bad things can easily happen anywhere. That’s why we need a balance, an informed public that can provide that balance.

Illegal medical laboratories in the United States, toxic toys manufactured in China, accidents on the U.S. railroads, the industry of horse racing in America are just some of the topics that you have explored. How do you choose them?

– I choose topics that interest me personally and are related to others, for which I believe that the society will benefit. The subject I am interested for is not processed for a few days or weeks, I deal with it for months. After the research work, I can report about it with authority and be sure that the conclusions I have reached are true. I choose my topics knowing that there are people who are harmed without reason, convinced that if I uncover and write about that, it’s going to come out to something good. Usually it happens so.

Have you ever been under political, economic or social pressure during your research work?

– Always. Economic and political pressure is always present, such is the nature of society. My job is to resist this pressure. I often work under pressure but I have always been supported by my editors and employers to continue. Pressures exist in the United States, as well as anywhere else in the world where there are media that are trying to do their job.

The number of those who claim that “to be well informed means to be on Facebook or Twitter” is increasing. Is the world web a good source?

– World Wide Web is just a vital tool. Journalists who are limited just to the electronic form of communication are not good journalists. You can not in any way replace talking to people or going to the site. It seems to me that more and more journalists lean too heavily on Twitter and web-sites instead of lifting the phone-handset and talking to people, going to the terrain. And without that you do not have a complete picture of what you are editing.
Source: B92